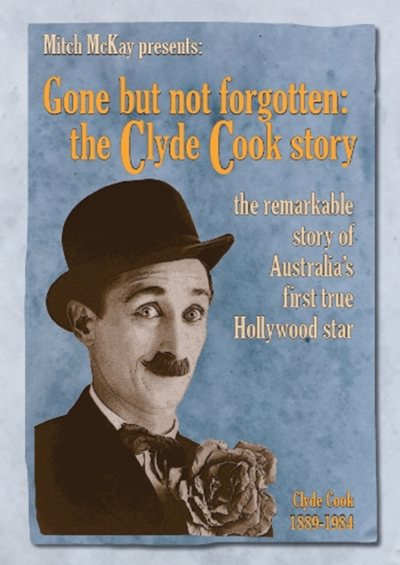 Gone but not forgotten: the Clyde Cook Story

This publication tells the story of Clyde Cook a remarkable man who was born in a small timber village near Port Macquarie, New South Wales, and who went on to become a feature specialty act with J. C. Williamson's before trying his luck in Great Britain. There he established a considerable reputation as a dancer and singer in vaudeville, revue and musical comedy.
And that's only half the story. With his trademark moustache, Cook starred in a series of slapstick comedy films in the early 1920s which had been built around his talents as an acrobatic comedian. In the process he became Australia's first true Hollywood star, and later went on to appear in more than 140 films.
The Foreword has been written by Cameron Marshall, Regional Content Manager, ABC Mid North Coast and the Back Cover by Dr Clay Djubal from Australian Variety Theatre Archive.

Copies of the publication are available for $54 which includes postage.

"In Gone but not forgotten: the Clyde Cook story, Mitch McKay takes us on a journey of discovery, providing insight into a man who had few equals as an eccentric dancer and whose contribution to American cinema saw him accorded a star on the Hollywood Walk of Fame".
Dr Clay Djubal

There is no return and refund for books. If you are not happy with the condition of the book when you receive it, please contact us directly.

Shipping is included in the price.

Save this product for later
Display prices in: AUD